A nurdle is a small plastic pellet about the size of a lentil which is used to make nearly every plastic product you can think of.

Nurdles are very hard to spot, which means that in order to find them, you really have to look. They are so small that they usually go unnoticed and like all other

plastics, nurdles are often mistaken for food by animals.

On the 10th of October 2017 in Durban, 49 tons of nurdles were lost overboard in a storm. These nurdles travelled down past the Transkei beaches, around Scarborough and Kommetjie beach and are now travelling around and up along the West Coast.

The first nurdle I encountered was while walking along a beach in the Transkei. There, we found two types of nurdles: recycled and non-recycled

nurdles. – There really is no difference between the two, as they are both still plastic.The only difference is that recycled nurdles are made from recycled plastic and they are most commonly yellow, blue or brown in colour.

As we walked along the beach we found more and more nurdles leading towards the dunes and the river. In an hour we had collected half a bottle full of nurdles and we thought the beach was clean. When we came back the next day, we found that the exact place we had cleaned the day before was now filled with nurdles. We realized that not only do the nurdles lie on top of the sand, they lie underneath it as well, and after collecting nurdles for over two hour

s, the bottle was almost full.

At first glance the beach looks completely plastic free, but once you take a closer look, you start to notice all the smaller nurdles and micro plastics that

lie just beneath the surface of the sand.

When an animal eats a nurdle or any plastic, its stomach feels full, so it doesn’t eat any more food. The animal then dies from

starvation because it hasn’t eaten anything besides the plastic, and when the animal starts to decompose, the plastic that it has eaten is left over because plastic takes up to 1000 years to decompose and breakdown.

By 2050, there will be more plastic in the ocean than fish.

After this eye opening experience I think that straws and plastic bags shouldn’t be used at all even if needed. There are alternatives that can be used such as bamboo, glass, paper and seaweed straws. Fabric, Paper shopping bags and ReLife dog food shoping bags: https://www.facebook.com/ReLifeCapeTown/

I was introduced to eco bricks a few years ago at my eco warriors club at Bay Primary. I remember once surfing in Muizenburg with all this plastic and these 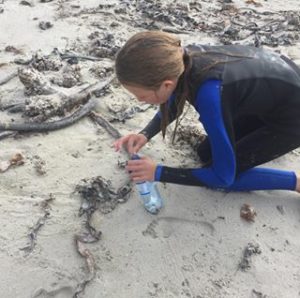 It made my family aware of how much wasted plastic packaging there is on food. Plastic around cucumbers?? Polystyrene and plastic on everything from broccoli to mushrooms, plastic bags to put your vegetables in, plastic over fruit and potatoes, the list goes on and on.  We made a choice to never use a plastic bag again. Even if it means taking all the goods in the trolley to the car because we forgot to bring our boxes and bag alternatives. We sometimes get very con 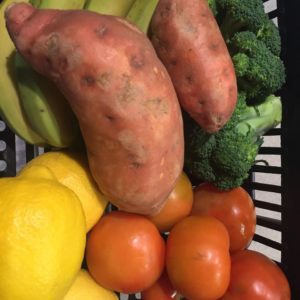 fused looks from the people at the tills.

The other day I stood in a local supermarket. They had run out of plastic bag alternatives. Every single person was taking a plastic bag.  Did you know that 10 million plastic bags are used around the world daily? If you tied them all together they would wrap themselves around the world seven times in an hour.  What are we doing as citizens to stop this crazy use of plastic bags? Most of them end up at landfill or in the sea killing marine life. Once the marine life dies and breaks down, the plastic does not and carries on destroying our environment.

Eco bricking has taught me to consider what we do with our waste. If it is can’t be recycled it goes back to the dump. Which in our area is by the sea. With our high winds in summer a lot of trash from the dump ends up back in the sea.  This is why I choose to eco brick our rubbish on the beach.  There is nothing worse doing a beach clean-up only to realise 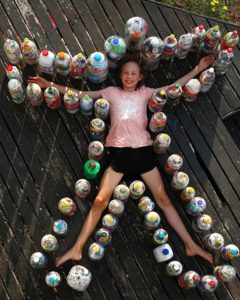 that the plastic picked up is going back to the dump and is not cleared responsibly from the environment. Next time you pick up a piece of plastic. No matter where you are, consider rather putting it into a plastic bottle to eco brick. Let’s try and get as little waste to the landfill as possible.